Investment Highlights
Asset Quality and Curb Appeal: The seller of the Property executed a capital expenditure plan of approximately $4.0 million at the Property over the course of the past two years. Of this, approximately $3.5 million was spent on exterior building improvements, deferred maintenance, amenities, etc., and approximately $500,000 was spent on interior improvements.
Location: The Property is located adjacent to the Raleigh-Durham Research Triangle of North Carolina. Anchored by Duke University, The University of North Carolina at Chapel Hill, and North Carolina State University, the Research Triangle comprises 7,000 acres, is home to over 260 companies such as IBM Corporation, Cisco Systems, Inc. and Credit Suisse, and employs approximately 48,000 skilled workers.
Demographics: Per CoStar, the average annual household income is approximately $82,000 and $99,000 in one and three-mile radii from the Property, respectively, which should allow for tenants to afford projected rental increases at the Property during the hold period.
No Deferred Maintenance: The third-party Property Condition Report for the Property recognized no immediate repair items, due primarily to the extensive capital improvements executed by the seller, which could lower necessary capital expenditure and repairs and maintenance expense during the hold period.
Management

Willow Creek Partners ("Willow Creek" or the "Real Estate Company"), is a privately-held, vertically integrated multifamily investment and management firm based in Reston, VA. Over the past three years, Willow Creek has acquired ten assets, nine of which are in North Carolina, four of which are in Greensboro, NC. Willow Creek has also recently opened an office in Raleigh, NC and upsized their team from seven employees to twelve, including a VP of Property Management, two VPs of Construction, and two Regional Managers. Willow Creek primarily targets multifamily, both conventional and student housing, in markets where economic conditions provide for increased real estate demand and aims to be long term investors in income-producing real estate. Willow Creek executes their business plans by employing a proven investment strategy comprised of three major elements: identifying markets with built-in demand drivers, focusing on secondary and tertiary markets where local knowledge can potentially create a competitive advantage, and unlocking value through rigorous underwriting and proactive asset management. RealtyMogul previously invested with Willow Creek in Hawthorne North Ridge, Lofts at Midtown, and Triangle Park Apartments.

An investment overview of Hawthorne North Ridge can be found here: https://www.realtymogul.com/investment-opportunity/905616

An investment overview of Lofts at Midtown can be found here: https://www.realtymogul.com/investment-opportunity/633421

An investment overview of Triangle Park can be found here: https://www.realtymogul.com/investment-opportunity/477060

In this transaction, Realty Mogul investors are to invest in Realty Mogul 104, LLC ("The Company"), which is to subsequently invest in Lofts at Midtown Partners LLC ("The Target"), a limited liability company that will, through a 100% wholly owned subsidiary, hold title to the Property. Willow Creek Partners (the "Real Estate Company") is under contract to purchase the Property for $24.0 million ($130,435 per unit) and the total project cost is expected to be approximately $27.2 million ($148,027 per unit). The Property will be managed by First Communities, a third-party property management firm which also manages all of the Real Estate Company's other multifamily assets and has over 30,000 units under management in the SE, SW and Mid-Atlantic US.

The Real Estate Company plans to implement this capital expenditure strategy in each unit type over the first year of the hold period and monitor the ability to push rents as expected. Should the market prove unwilling to pay up for the superior renovated units, the Real Estate Company will back renovations down to the level of renovations previously executed by the seller and distribute the excess capital expenditure money to investors.

The Real Estate Company plans to renovate the remaining 99 unrenovated units during the hold period and sell the Property in four (4) years at a 5.90% cap rate. A sample of the renovation planned for the two-bed, one and a half-bath unit type may be found in the table below. 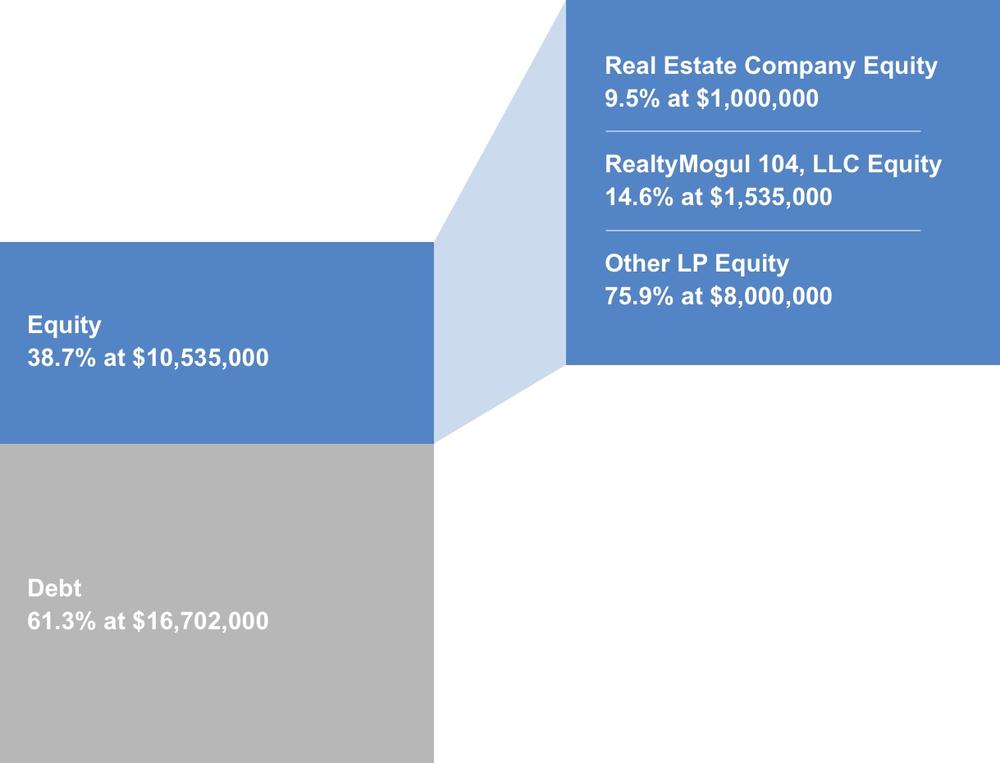