The investment is expected to produce double-digit cash yield to RealtyMogul investors, with annual cash flow ranging from 12.2% to 17.5% and expected average cash-on-cash of 15.3%.

The Real Estate Company is an experienced office operator, as well as a repeat partner of RealtyMogul. It has owned and operated real estate properties with a total basis exceeding $346 million.

The Columbus office market is one of the healthiest in the country thanks to significant employment gains and years of conservative construction (according to CoStar). Over the past five years, the market has experienced average annual rent growth of 5.6% and an average vacancy rate of 5.1%.

Investment Highlights
The Real Estate Company is buying the Portfolio for $37.8 million or $91 per square foot ($117 per square foot for the office and industrial space, and $14,092 per space for the parking garage), which represents a going-in cap rate of 8.72% on trailing three month annualized net operating income.
The Real Estate Company has budgeted $2.5 million for building and amenity upgrades and repairs, along with an additional $4.0 million for tenant improvements and leasing commissions.
The Real Estate Company intends to retain the current Colliers property management and leasing team.
The exit strategy is to sell the Portfolio in five years at an expected cap rate of 8.25%.
Management

Ravinia Capital Group (the "Real Estate Company"), founded in 2013, is a Chicago-based real estate investment and ownership firm. Founded by seasoned real estate professionals with 50 years of combined investment, asset management and redevelopment experience, the Ravinia team has owned over $346 million of commercial real estate. Ravinia focuses exclusively on middle market transactions with asset values ranging between $10 million and $100 million in targeted US submarkets. It seeks to acquire properties at prices below replacement cost with in-place cash flow and value-add upside. This approach is based upon the principals' real estate experience through various economic cycles.

RealtyMogul investors previously invested alongside Ravinia Capital Group in the acquisition of 544 Lakeview Parkway in Vernon Hills, IL in Q4 2018.  In Q2 2019, Ravinia executed a lease with a technology company to move into suite 204 (3,512 SF) after completing the build-out of the space as a speculative suite, and is currently renovating the building common areas.

In this transaction, RealtyMogul investors are to invest in RealtyMogul 141, LLC (the "Company"), which is subsequently to invest in Columbus Office Portfolio, LLC (the "Target"), a limited liability company that will indirectly own interest in the Properties.  Ravinia Capital Group (the "Real Estate Company") is under contract on the Properties for $37.8 million ($117 per square foot for the office and industrial space, and $14,092 per space for the parking garage). The total project cost is to be $46.1 million ($111 per square foot).

The Real Estate Company (Ravinia) will implement a mark-to-market and lease-up strategy at both properties to further enhance cash flow, with $2.5 million earmarked for improvements. These include replacing the roof at Brewery Tower and implementing common area improvements at both properties. At 855 Grandview, the Real Estate Company intends to raise the warehouse rent to market and facilitate the expansion of one of the major tenants into vacant contiguous space. At Brewery Tower, the Real Estate Company intends to relocate several tenants to maximize revenue and facilitate the expansion of tenants that will likely require more space. Amenities will also be improved at both buildings. 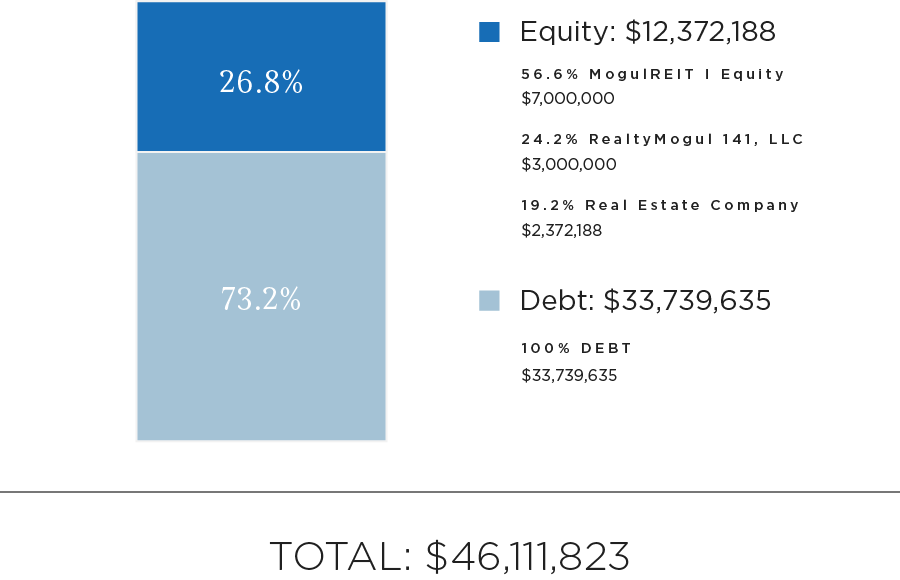