Kaufman Development is one of Columbus' most innovative mixed-use developers. Kaufman's unique approach focuses on building communities of high-design and high-impact, while enriching the lives of the tenants who live and work in them and the neighborhoods in which they are located. Notable projects include 801 Polaris, 600 Goodale, 250 High, 80 On The Commons, The LeVeque Tower Residences, and Gravity Phase I. Kaufman has appeared on the Inc. 5,000 list of the nation's fastest growing companies and its projects are consistently ranked at the top of Columbus Underground's best development lists.

Given this is an opportunity zone investment, investors can anticipate tax-free treatment of capital gains upon sale of the asset. The investment is expected to allow for the deferral of tax on rolled-in gains until 2027 and a 10% decrease in the tax owed on those gains. Additionally, the investment may be eligible for a State of Ohio tax credit, which represents 10% of invested amount and can be sold if not used. This is expected to further enhance pro forma returns.

*Consult your tax professional. State of Ohio tax credit is first come, first served and is not guaranteed. Next application window opens 1/4/2021.

The Project is being developed in the East Franklinton neighborhood, a neighborhood generally recognized as one of the city's most desired areas for entrepreneurial employers, unique retail and entertainment venues, and a preferred destination for residents from Columbus' creative class. It has also emerged as a destination of choice for high-growth Columbus’ companies. Downtown Columbus’ office space is currently undergoing a major transformation with office tenants demanding contiguous, Class A office floor plates in new buildings that are in small supply in and around the Columbus CBD. The strong commercial leasing at Kaufman’s 250 High and 80 On The Commons projects exemplifies this.

Investment Highlights
*Kaufman Development anticipates tax-free treatment of capital gains upon exit given the Opportunity Zone designation. Gravity Phase II's projected return is equivalent to an 18.1% IRR, 9.0% cash on cash, and 3.12x equity multiple on a non-Opportunity Zone development when the benefit of tax deferral and reduction on the rolled-in gains is coupled with zero federal cap gains taxes on new gains after the projected eleven-year hold period. The projected actual pre-tax returns are an IRR of 14.1%, cash on cash of 9.0%, and equity multiple of 2.62x, prior to taking into account Opportunity Zone benefits.
Gravity Phase II aims to be one of the most creative and forward-thinking mixed-use projects in the country, centered on wellbeing, impact and creative expression.
The Project is being delivered directly across the street from Gravity Phase I, a similar mixed-use development completed by Kaufman earlier this year. At Gravity Phase I, residential units are currently 92% occupied and the office and retail components are currently 72% leased.
GMP (Guaranteed Maximum Price) contracts are fully negotiated with all pricing complete and ready for execution.
The exit strategy is to sell the Property in eleven years at an expected blended cap rate of 5.54%.
The Project will positively impact the surrounding community through programming focused on wellness, mental health and entrepreneurship. Through a partnership with Homeport (a Central Ohio non-profit affordable housing developer), 50+ apartment units affordable to residents earning less than 60% of Area Median Income will be developed on an adjacent site and will share parking with the Project. Additionally, a portion of the Project's residential product offers housing options for $800 and under per month, including utilities, in a fully-amenitized project that is walkable to the major downtown employment centers. The office component is anticipated to attract high-growth job creating tenants and the developer’s unique partnership with Rhove allows residential renters to “own where they live.”
Management

Kaufman Development evolved with the career of its founder, Brett Kaufman. After getting his start in the banking industry, Mr. Kaufman entered the world of real estate. Prior to founding Kaufman, he worked with large real estate developers in Central Ohio. Kaufman Development was founded based on a growing passion for creating innovative communities filled with purpose. He wanted the communities to focus on wellbeing, impact, and creative expression. And in doing so, he believed they could have a positive impact on the lives of the residents.

Since founding the company in 2011, Kaufman Development has developed and managed over 1,500 residential units and over 400,000 SF of commercial space in nine distinct projects.  The company has won numerous awards, including the first ever ULI Columbus Excellence in Development award.  Kaufman Development has donated over 3,000 hours and over $350,000 in contributions to various philanthropic organizations, including BESA, KIPP Journey Academy, Community Shelter Board, Ohio State University Star House, Hunger Alliance, Ronald McDonald House, OSU James Cancer, Columbus Jewish Federation and many others.

The total cost to complete the Project, based on execution-ready Guaranteed Maximum Price contracts with general contractors, is approximately $165.7 million.

The business plan calls for an eleven-year hold, at which point the Property is projected to be sold at a 5.54% cap rate for $230.9 million.

A summary of the development budget can be found attached. 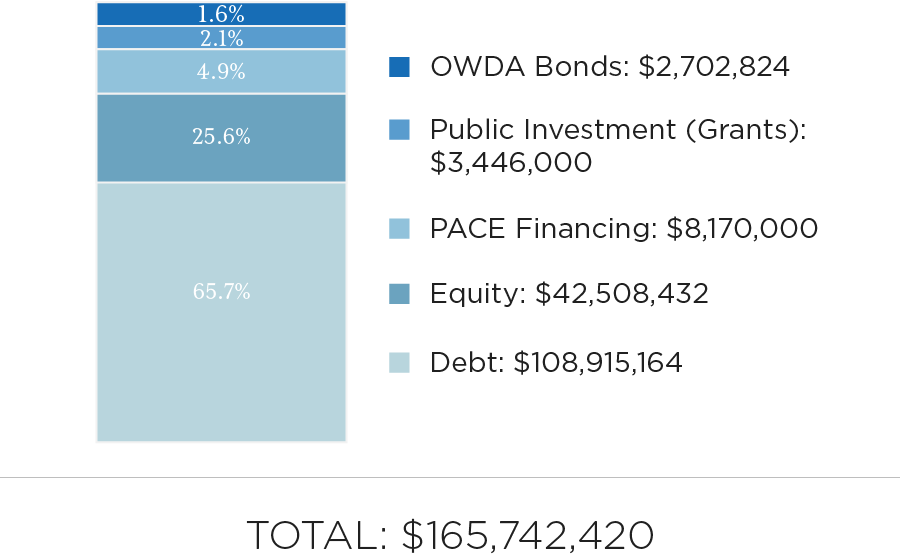